When it comes to supermarket paperback literature, you can hardly ever go wrong if you pick up a volume that’s got a vampire or two in it. Or Nazis. Or, perhaps, malicious shape-changing witches. 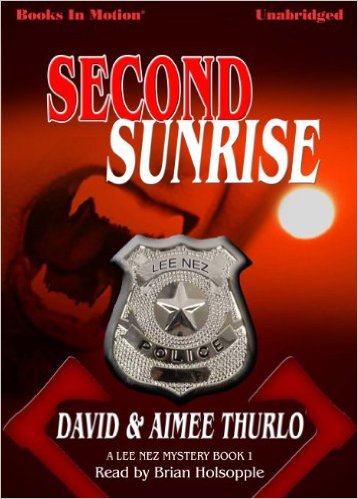 Not only does “Second Sunrise” have vampires and Nazis, it’s got a Nazi who is a vampire – and a terrorist. He wants blood. He wants power. And he wants plutonium.

The unlikely hero of “Second Sunrise” is Lee Nez, a New Mexico state police officer. Nez, a rather ordinary Navajo lawman, is making his mundane rounds one evening near the end of World War II when he and his partner go to investigate the sound of gunfire and discover that a U.S. Army convoy has been ambushed.

You guessed it – Nazis!

When the smoke clears, everybody appears to be dead and our protagonist is seriously wounded, but he manages to hide the convoy’s secret cargo.

You guessed it – plutonium!

A short time later, the plucky but mortally wounded lawman is captured by a dead Nazi who turns out to be a vampire who subsequently mixes his blood with that of the police officer in an attempt to keep Nez alive long enough to find out where he’s hidden the plutonium.

Nez outwits the Nazi vampire, boots him over a cliff and sets him on fire, but the bloodsucker manages to escape.

And that’s the least of Nez’s problems, because he’s also been turned into a vampire himself.

As luck would have it, Nez finds a tribal medicine man who is successful in reversing some of the damage, which means Nez will have remarkable strength, age very slowly, be able to go out in daylight if he uses plenty of sunblock and survives on a normal diet supplemented, from time to time, with a refreshing glass of calves’ blood.

There are some drawbacks. His vampire nature can be detected by Navajo witches known as “skin walkers” who can transform themselves into large, homicidal animals at the drop of a hat and lust after the lawman’s blood.

So Nez has to deal with periodic visits from evil, ill-tempered wolves and panthers who are dedicated to chasing him all over New Mexico.

He buys a lot of sunblock, kills a lot of skin walkers and actually settles into a kind of comfortable routine after 50 years, but there’s trouble looming on the horizon. The former dead Nazi vampire is now a practicing terrorist and he’s back in New Mexico, masquerading as a German Air Force pilot undergoing training at Holloman Air Force Base while he searches for the missing World War II plutonium and plots the demise of Nez, now known as officer Leonard Hawk.

A bit of a sticky wicket, eh?

Will Nez meet his match in the bloodsucking terrorist, be eaten by ravenous skin walkers or, perhaps, fall prey to a comely FBI agent?

Hey, amigos, if you haven’t already figured it out, anything can happen in “Second Sunrise.”

You want answers? Go to the supermarket. Pick up some Bloody Mary mix while you’re at it…