There’s hope for everyone who was left feeling empty and aimless as the bitingly popular “Buffy the Vampire Slayer” TV series wrapped up its final season last spring.

The newest unauthorized guide to the series, “The Girl’s Got Bite,” is now available for hardcore Slayer fans from Berkeley to Brattleboro and it’s more fun than rolling skulls off a log. 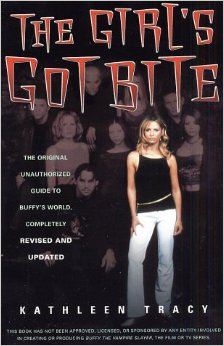 Written by Kathleen Tracy, this exhaustively researched volume catalogs 131 episodes of the eerie series from its humble beginnings in 1997 to its next-to-last season in 2002, providing crucial details about the life and times of Buffy Summers, a typical high school girl – and later college student – destined to stand alone against voracious vampires and their ilk in a quaint little California town called Sunnydale, which was, unfortunately, built over a Hellmouth. (You’re following all of this, right?)

Can you slay a hellhound with a hunga munga? Not likely, but it helps if you’re a diminutive blonde high school girl who spends most of her spare time patrolling the local cemetery in search of wayward bloodsuckers.

“The Girl’s Got Bite” gives Buffy fans – and would-be Buffy fans – everything they need to fill in unfortunate gaps in their knowledge of Slayer lore.

For example, let’s just say that you’re enjoying a Bloody Mary at your favorite after-sundown thirst emporium when some loudmouth interrupts your beverage consumption with “Hey, betcha don’t know what happened on the ‘Inca Mummy Girl’ episode, Mr. Know-It-All.”

If you’ve studied “The Girl’s Got Bite,” you’ll be able to smoothly reply, “Oh, you mean the one in which a mystical seal is broken, letting a 500-year-old mummified Incan princess return to life as a toothsome 16-year-old who stays alive by sucking the life out of everyone who crosses her path? Is that, perhaps, the episode you’re referring to?”

Most likely, that loudmouth will slither right back into the shadows, thoroughly cowed by your commanding knowledge of Buffy’s complex world.

It’s important to remember that, although Buffy originally was destined to slay nothing more than vampires, the TV series added a score of otherworldly evildoers who had to be exterminated to save the world from perpetual darkness.

“The Girl’s Got Bite” will enable you to keep all these terrifying troublemakers in the proper order so you’ll never become the target of rude laughter if you somehow manage to confuse Eyghon with Mynhegon, or Drusilla with Dracula.

And if you had to ask “Who?” about any of the aforementioned characters, you really, really need “The Girl’s Got Bite.”

Pick it up before you’re branded hopelessly ignorant or find yourself dangerously uninformed when confronted by chaos demons.